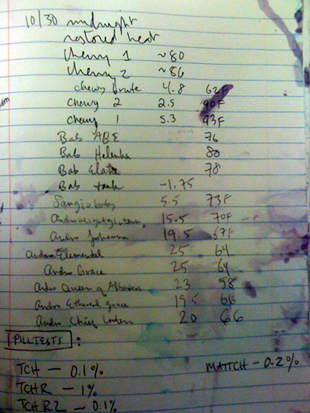 This is our richest, ripest year for Babylon yet. The wine has a very full Amarone character that makes us very happy. No raisining or dried fruit at all, but very complex, nearly strange flavors and aromas. One can still sense a great degree of dark fruit, and nothing is strange about this. But the fruit is a colleague at best and does not dominate. Star anise, Balsamic vinegar, blood sausage, rosemary … Wild, barely civilized, as usual.

The reasons for this excellence: our most perfectly ripe fruit since 2004, harvested without any raisining, damage, rot, threat of rain. Nothing. But then all kinds of strange things started happening at the winery. The cooling system failed and we had to enforce the cold soak with thousands of dollars of dry ice and pumpovers. We could not seal the big stainless tank outside and it started raining. So after we passed the most explosive period of fermentation, we drained the tank to one of our wooden tanks indoors. Then we transferred the must; pretty much bucket by bucket. That surely stirred things up a lot, and amounted to a huge reorganization of the fermentation that we never would have done normally. Then the fermenation stuck, at about 5 brix. Inexplicably.

So we drained a bunch of wine off, used recently harvested hudson syrah to start a new fermentation (that we called “The Bomb”), and gradually introduced the stuck wine into the Bomb. When we filled a 350-gallon tank with well-fermenting (re-fermenting!) wine, we began to transfer it back to the tank and began pumping it over. For several days, the tank remained stalled. Finally, it began fermenting again. The fermentation was slow at this point, and for the first time, we decided to drain and press the wine and put it down to barrel when it was still sweet— at about 1% residual sugar. We thought that the wine was continually improving during this very long maceration, but it could not go on forever! Because of the long maceration, we did not press at all. The wine finished fermenting during the summer of 2009.