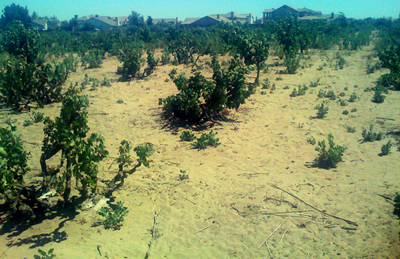 This was the first of many wines that Tegan Passilaqua has led us—literally, led us—to produce. He knows the old vine vineyards of California better than anybody that I know. He introduced me to Joe Duarte late in the summer of 2004 and so brought us to Joe’s amazing old Carignane and Mourvèdre vines that have been growing for a hundred years in the deep sand of Contra Costa county.

We harvested the grapes at the same time, bled them pretty thoroughly at the instigation of Christopher Vandendreissche, co-fermented them in punchdown, and put the resulting wine in barrel for 18 months. We hoped for the onset of brettanomyces, but never found it; allowed the wines to mature without topping or sulfur, and finally bottled a very flavorful wine that only began showing its virtues years after bottling.