The winery in Los Angeles 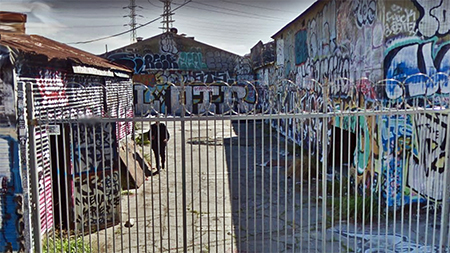 It is such an exciting moment and our greatest undertaking ever.

We are going to bring Scholium winemaking to a 97 year-old corrugated steel building on the banks of the Los Angeles River.

The Scholium Project has never had a permanent home. We now have one mind: and one somehow appropriate to our strange and unconventional project. We do not image a functional structure in the country, suited to storing barrels for maturation and equipment during the off-season. We imagine a home in the heart of the city, where will make bring fruit and make wine for all to see—but not just a facility for crushing grapes, but the home for a culture, where we can host lectures, tastings, conferences, cook outs.

In some sense, our mission is distinctly urban, not rural or pastoral: it is about the culture of winemaking. For this reason, the heart of a city is the perfect home.

The lot is 0.43 acres, in the middle of an industrial area in the midst of rapid redevelopment. The lot nearly abuts the Los Angeles River; it is cut off from the concrete banks of the river by just a few feet of railroad track.

The lot holds two old, corrugated steel buildings; one huge and cavernous, the other small and compact, both built as warehouses around 1900. You can see them both above; the small building on the left; the large building L-shaped, behind and coming up on the right. 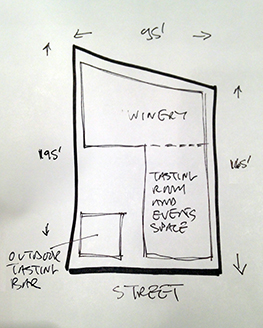 We will make wine and store barrels in the portion of the larger building closer to the river; in the portion closer to the street, we will have public spaces: the tasting room, but also a gallery space; tables for snacking, working, hanging out; a library of wines for tasting and purchase. We will use this smaller building for an outdoor tasting bar. It opens onto the broad outdoor space you see behind the gate.

The parcel is a sub-division of the Wilhardt tract, named for the German immigrant Louis Wilhardt who purchased several acres north and east of the downtown around 1830, where he planted grapes and built a winery. It is absolutely remarkable and not well known: Los Angeles was the center of grape growing in the United States until about 1900, and one of the most important grape growing regions in the world. German and French immigrants came here beginning in the 1830s to grow grapes and make wine, pulled in by the warm, dry climate, the irrigation offered by the river, and the gravelly alluvial soils on its banks. By the the 1880s, there were hundreds of acres under vine, and new Americans from all over the world were making (and exporting) millions of gallons of wine in what is now the city of Los Angeles. Wilhart built a winery on the corner of the tract, only a few hundred feet from where we want to re-establish winemaking on the edge of the river.

Grape growing declined rapidly after the Atchison, Topeka, and Santa Fe Railroad reached Los Angeles in 1885. The connection led to remarkable population growth in the city and turned the agricultural land adjacent to the river to a vast warehouse district for the freight coming and going on the rails. Within two decades, nearly all of the grape-growing had moved east to the area around Pomona, and north to Napa and Sonoma.

The Vineyards, north and south

There are amazing vineyards all over Southern California—that is part of the attraction for us. There are still traces of the original vineyards—not in the downtown itself, but in Ontario, east of the city—where many of the champions of farming and winemaking moved their vineyards as the city quickly replaced farmland with warehouses. It is another wonder of the south—there are nearly a hundred acres of vineyards east of the city, planted on their own roots that antedate Prohibition and more.

San Diego County has amazing high altitude vineyards on stern, rocky soil, also nearly unknown, and a small amount of very old vines. There are treasures north and west of the city too—in the mountains that lead to the sea, and the high deserts. So much to explore and reveal! And lastly, there is an old and remarkable tradition of growing grapes and making wine in the mountains immediately south of the border, in Mexico, but especially in Valle de Guadalupe, stretching from Ensenada north. The winery will become a kind of gravitational center for all of these very disparate areas, and offer a single place to see what the vineyards of the South are capable of.

But we will not focus exclusively on the South—the vineyards that have been our foundation in the North are too precious, too special. For the first few years, we will continue to make our Northern California wines—the Prince, the Sylphs, Babylon, the FTPs, Pergamos, Ciliegio, at Tenbrink in Suisun Valley. We will have the choice eventually to bring the fruit south to the city or to continue making the wine in the north. The time is very far away. Our intention is to remain devoted to small, idiosyncratic, and excellent fruit sources—at either end of the state.

You may go here to join the efforts of dear friends and fans to help us begin this tremendous project.