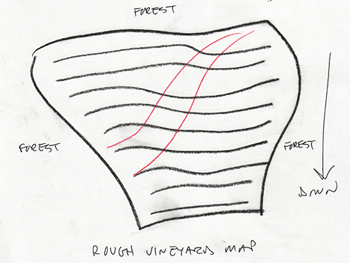 We will ever only make one unblended wine from this remarkable vineyard. I have named the wine for Margit Lindholm, the woman who planted it.

She began planting the vineyard in the 1970s on a forested hillside in Kenwood. It is near the end of Nun’s Canyon Road, on the west facing side of Spring Mountain, at about 1000 feet above the floor of the Sonoma Valley below. Margit was in her 70s when she began planting, converting some apple orchard land and clearing more land for the vines. Once the land was cleared, she and a friend did most of the planting themselves. The vineyard has never had irrigation— it is essentially in the middle of the woods—and so Margit had to irrigate the young vines by hand with water from a truck.

What was most remarkable about the vineyard’s condition in 2006 is that there were still some vines extant from the original planting–in spite of the fact that this isolated vineyard had never been irrigated for 30 years! I struck a bargain with Joe Votek, who farms the vineyard for the Hamilton family, Margit’s heirs, to harvest for me only the fruit from the old vines. It was a generous agreement on his part, not easy for him to arrange or his workers to accomplish.

Even more generous on his part was his willingness to harvest the vineyard in 5 sections for me. I had decided on these sections by monitoring the growth of the vines for two years and tasting fruit nearly daily in advance of harvest. The reason for the sections is demonstrated in the maps at left. The vineyard itself is a trapezoid, somewhat more wide at the top than at the bottom. The top of the diagram is the top of the vineyard, at the crest of a slope that is so steep that the vineyard can be worked and harvested only by caterpillars; regular tractors suffer. The red lines indicate two crucial geographical figures that completely determine the nature of the fruit that the vineyard produces. There is a spring at the top right hand corner of the vineyard. It flows below ground most of the year (it is visible above ground during the rainy winter) and feeds the vines in a triangle that becomes wider as the spring flows downhill. This region of subterranean irrigation is indicated by the rightmost red line and the smaller triangle that it borders.

The second line indicates the contour line of a swale that affects most of the vineyard. As you walk one of the upper rows from left to right (in the map), you drop suddenly a little downhill partway down the row. This means that the most elevated and driest section of the vineyard is the upper left-hand corner, the section marked “A” in the lower map. A1 is the highest, driest, least vigorous section, A2 next… The B section is the part of the vineyard most affected by the spring; it was so much more vigorous than the A-section that the two sections did not look like they were part of the same vineyard.

I fermented each of the A sections separately and divided the B into B1 and B2. I aged each fermentation in its own barrel (or barrels in the case of the B lots) and did not blend them until bottling. We bottled the A1 by hand on May 30; the MB in September 2007.

Harvest conditions were brutal in 2006. There were weeks of beautiful cool, calm weather in September and October– but too cool. I was afraid that the fruit would never ripen properly and completely. My hand was forced on October 25, already very late in the season. We suffered winds up to 60 miles per hour and day-time temperatures up to 85 degrees. In a day, all of the remaining leave were stripped off the vines. The forecast for the next day was less wind, but 100-degrees at noon. We began harvesting at dawn on the 26th and brought all of the fruit in with no leaves remaining on the vine, but no raisining of the fruit. The vineyard looked ravished.

This is the only vintage that I will release from the old vines at Margit’s. I failed to make an excellent wine in 05 and so could not release it as a single-vineyard wine. It was blended with some syrah and became the Satrapies. After this brutal harvest, Joe felt obliged to replant the remaining old vines and complete the renovation of the vineyard that he had begun ten years before. No more of the vines planted by Margit exist.